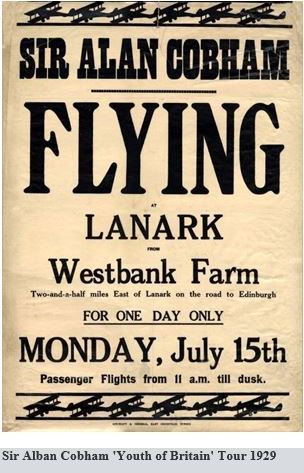 Sir Alan John Cobham, KBE, AFC (6 May 1894 – 21 October 1973) was an English aviation pioneer. In 1929 Cobham mounted his first tour of Britain, called the Municipal Aerodrome Campaign. This was an ambitious plan to encourage town councils to build local airports in the hope of drumming up business for his activities as an aviation consultant.

Each event would start with free flights to local dignitaries followed by free flights for local schoolchildren, the latter funded by Sir Charles Wakefield, the founder of Castrol, who paid the fares for ten thousand such flights. The day would finish with as many paid-for pleasure flights as could be managed for the public, the income from which would pay his expenses and make him a profit. The tour visited 110 venues between May and October 1929 using a ten-passenger de Havilland DH.61 Giant Moth G-AAEV named Youth of Britain. Cobham declared the tour to have been a great success.

Westbank and Springbank farms were used as landing strips. Other aviation events continued to be held in Lanark ’til 1935, building on the interest in aviation generated from the Lanark Airshow held in 1910, the first international airshow held in Scotland.