Carnwath has an interesting history going back to the Medieval period when the motte was built by the Sommerville family who came to the area in the twelfth century. This still exists today as a feature in Carnwath Golf course. Field-walking and metal detecting in the area around the Motte have resulted in the recovery of both pottery and coins from the 12th and 13th centuries; the coins being silver pennies of Edward I.

The Sommerville family were also responsible for building a church across the road from the Motte; much of the original Medieval church has disappeared. What is left is the St Mary’s Ailse, which was constructed in 1424. The style of the ailse is similar to the church of Corstophine on the outskirts of Edinburgh and is typical of the Perpendicular style of architecture which was common in England at that time. In the the Ailse there are several monuments to members of the Sommerville family, the Dalzells, and the Lockharts. In the churchyard there many interesting gravestones including one of a knight and a memorial to some of the martyrs of the Covenanting era.

Carnwath had a Medieval tolbooth till the 1930s when it was demolished. This building went back to the early part of the sixteenth century at a time when the famous Red Hose Race started. It began in 1508 and is reputed to be the oldest foot race in Scotland. The tradition was that the local laird had to give a pair of stockings (hose) as a prize or forfeit his lands.

Although Carnwath lost its tolbooth, the records of the barony court of the Burgh of Carnwath survive and were published by the Scottish Record Society; these cover the period of the 1530s–1540s and give a fascinating insight into the story of the farming community in Carnwath and its surroundings 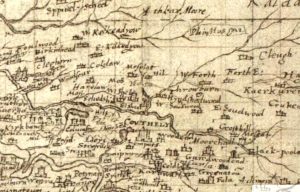 Pont’s 1596 map of Couthally. Couthally Castle, near Carnwath, was more important than Carnwath as it was then the home of the Sommerville’s. Later, the estate passed into the hands… 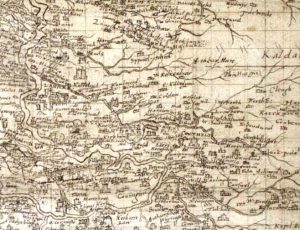 An amazingly detailed map of the Carnwath area by cartographer Timothy Pont in c. 1596. It is fascinating to see both a West and East Kilncadzow mentioned. Map courtesy of… 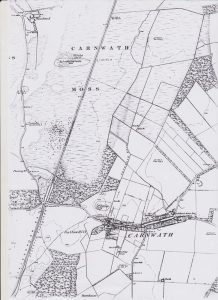 One of the first Ordnance Survey maps of Carnwath, from c. 1860. Several interesting features are included, such as the Lockhart Arms Hotel, which is now a farm. The original…

A 25″ Ordnance Survey (OS) map of Carnwath from 1858. The map shows the position of the Lockhart Arms Inn, which is now a farm. The tavern was one of…

This is the Timothy Pont map of Carnwath from 1596. It later formed the basis of the map created by Joan Blaeu of the Netherlands. The map does not mention…

A map of Carnwath (Couthally) by Joan Blaeu in 1645. Blaeu was a Dutch cartographer born in Alkmaar, the son of cartographer Willem Blaeu. Couthally rather than Carnwath is mentioned.…

A detailed Thomson Map of Carnwath dating from 1832. Couthally is featured here, though with a slight mis-spelling. Details include the Mansion House (Carnwath House), plus the Kirk and the…

A Ross Map of Carnwath dating from 1773. The map includes great detail of Carnwath, including street layouts. It is interesting to note that ‘Cowdayly’ is included in this map.… 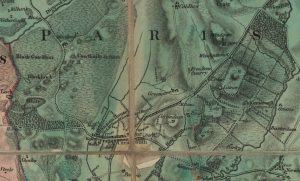 A Forest map of Carnwath dating from 1819. The map is detailed, showing the Kirk, manse, mansion house, and Green Inn. It also has the tolls prominently displayed. The money… 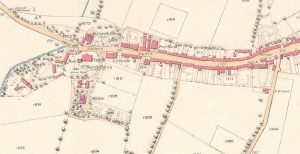 This was the second map of 1858, showing the whole village of Carnwath. The map indicates three churches in close proximity to each other, including St Mary’s Aisle.