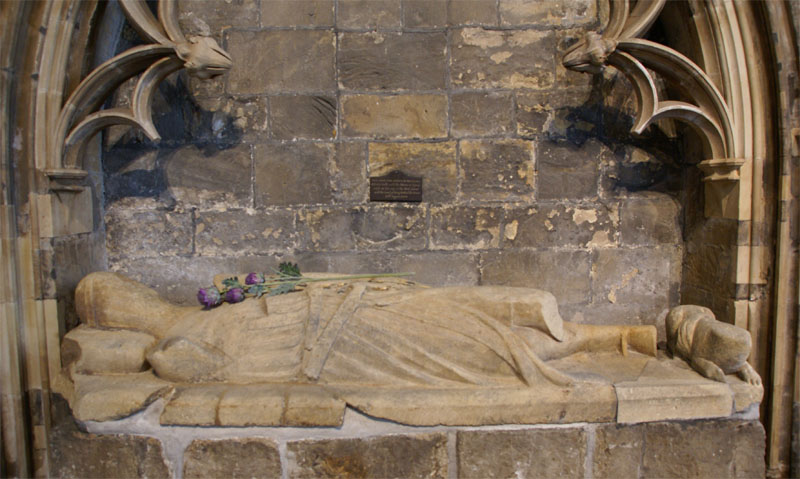 The story of the Good Sir James Douglas is not as well known as William Wallace which is understandable in a way because he was not the iconic figure that William Wallace was. Furthermore he was overshadowed by Robert the Bruce , victor of Bannockburn in 1314 and signatory to the famous declaration of Arbroath.

The principal thing that the Good Sir Douglas is remembered for is taking Bruce’s heart to Spain in 1330. Robert the Bruce left instructions in his will that he wanted his heart to be taken to the Holy Land. This was the goal of many knights and kings of the 13th and 14th century, for example Edward 1 of England spent a number of years in the Middle East. It must be said that Edward I achieved relatively little whilst he was out there in Palestine as the Mamluks of Eqypt had more or less expelled the Crusaders from the Holy Land apart from Acre and Tripoli. By 1330 there were no Crusader forts still in Christian hands. Therefore the best way of fulfilling Bruce’s desire, would be to take the heart in its lead casket to Spain, for in Spain it was the Christians who were pushing back Muslims.

Why was the Good Sir James chosen for this task? He was a friend and trusted lieutenant of Robert the Bruce as well as being linked in to the Bruce family through marriage. This came about as his mother was Elizabeth Stewart and it so happened that Bruce’s daughter Marjorie married Walter Stewart, son of Elizabeth’s brother.

Apart from being linked in with the Stewarts , the Good Sir James Douglas had played a pivotal part in assisting Robert the Bruce. He had little love for the English as his father Sir William Douglas had died as a prisoner in the Tower of London in 1298. As a result of Sir William Douglas’s support for William Wallace, the family land were given to Robert Clifford, a loyal supporter of Edward I. He pledged his loyalty to Robert the Bruce after his coronation in March 1306.

The Good Sir James shared many difficult times in the early years of his reign with Bruce but quickly proved himself as a capable tactician by recapturing the family castle- Douglas Castle on Palm Sunday 1307. The event is popularly known as the Douglas Larder in which he is alleged to have massacred the English garrison and set the castle on fire so the English could not use it. He continued to be a thorn in the flesh of the English by capturing the castle of Roxburgh in early 1314. He was also at Bannockburn but he was not one of the main commanders in that battle. However over the next four years the Good Sir James Douglas as a fine military commander. On several occasions he defeated the English army in the vicinity of York and almost captured Isabella, Edward I’s wife. As a result of his actions, the Good Sir James is sometimes referred to as the Black Douglas. This title according to some was given him because of the strength of his character, according to others because of his ruthless attacks on the English. Robert the Bruce certainly admired him and by December 1318 he was made joint Guardian of Scotland along with Randolph, earl of Moray in case Robert the Bruce should die without a male heir.

His continued military successes led to the English deciding to recognise Scotland as an Independent Kingdom at the Treaty of Northampton in 1328. The Good Sir James’ exploits really forced the hand of the Government of Edward III and for that Robert the Bruce was deeply indebted. It is interesting to note at this time, one of the terms of the Treaty was never honoured for over six and half centuries and that was the return of the Stone of Destiny!

The following year Robert the Bruce died and the Good Sir James was chosen to take his heart in an enamelled casket on a crusade against the Muslims. The Good Sir James ended up taking it first to Seville where he met Alfonso IX of Castile who was engaged in a war against the Moors of Granada.

From Seville the Scottish retinue went with Alfonso IX to Teba where they fought Othman, a Berber general . The Scots agreed to distract the Moors which they did but they were virtually all killed. Thanks to their sacrifice, the Christians won the battle. The legendary bravery of the Good Sir James stands out; apparently he threw the casket with Bruce’s heart into a melee and encouraged his men to chase after it. What is true however is that the Good Sir James was killed.

What happened next is that the Good Sir James’ heart was put in a lead casket and bought back to Scotland along with his bones. It would have been a rather smelly job bringing his body back and by the time that this happened the flesh would have rotted away.

The important question is how was he buried at Douglas. Was he commemorated just by the heart in the casket, or were his bones placed with those of his father?

The problem about the tomb is that the figure on top of the tomb is wearing a style of armour that was redundant by the time of the death of the good Sir James Douglas in 1330 at the battle of Teba. The tomb is more likely to have belonged to Sir William Douglas who was Governor of Berwick at the time of the Siege of Berwick by Edward I in 1296. He surrendered to Edward I but was one of the few Scottish nobles to support Wallace’s cause in 1297. This led to William being captured. He was first kept in Berwick Castle and then sent to the Tower in London; he died in the Tower in 1298.

What about the tomb ascribed to the Good Sir James–the style of the armour shown on the sandstone monument is similar to monuments produced in Northumberland and North Yorkshire between 1280-1310. Sir William had lands at Faudon in Northumberland and it is probable that his tomb was purchased there before his death. This was standard practice in the Middle Ages–purchasing your tomb before you died. Whether William’s bones were placed there is an unanswered question. It is also possible that the Good Sir James’ remains were added at a later date as the period after the death of the Good Sir James the South of Scotland was in political turmoil.

Also, the access to the workshops producing these monuments was cut off due to the wards between England and Scotland. There is of course the interesting possibility that the tomb came back to Scotland as booty after the raids by the Good Sir James that extended as far south as Pontefract in Yorkshire.

The style is certainly of the North of England workshops and it is similar to ones of the 1300 period in Hexham Abbey which is to Gilbert de Umfraville and is very similar in style to the one attributed to the Good Sir James Douglas. Incidentally Sir Gilbert Umfraville was one of the competitors trying to get hold of the Scottish throne after the death of the Maid of Norway. Edward soon ruled him out of the running and we do not hear very much about him.

Whether Sir William and the Good Sir James were actually buried in Douglas is a question difficult to answer. Did Edward I allow Sir William’s body to be returned to Scotland? As for the Good Sir James, all we may have is the heart. The rest of the body may have been buried near Teba in 1330. After all the body would have been rather smelly by the time it came back to Scotland. Sometimes if a nobleman died abroad only the heart was brought back, or occasionally the flesh was boiled off then the clean bones were sent back home. So probably neither person ended up in the tomb.

Whatever the true story is, there are doubts as to whether the tomb thought to belong to the Good Sir James is accurate. More than likely the tomb chest contained the remains of father and son. But it is extremely unlikely to have been made for the Good Sir James himself.