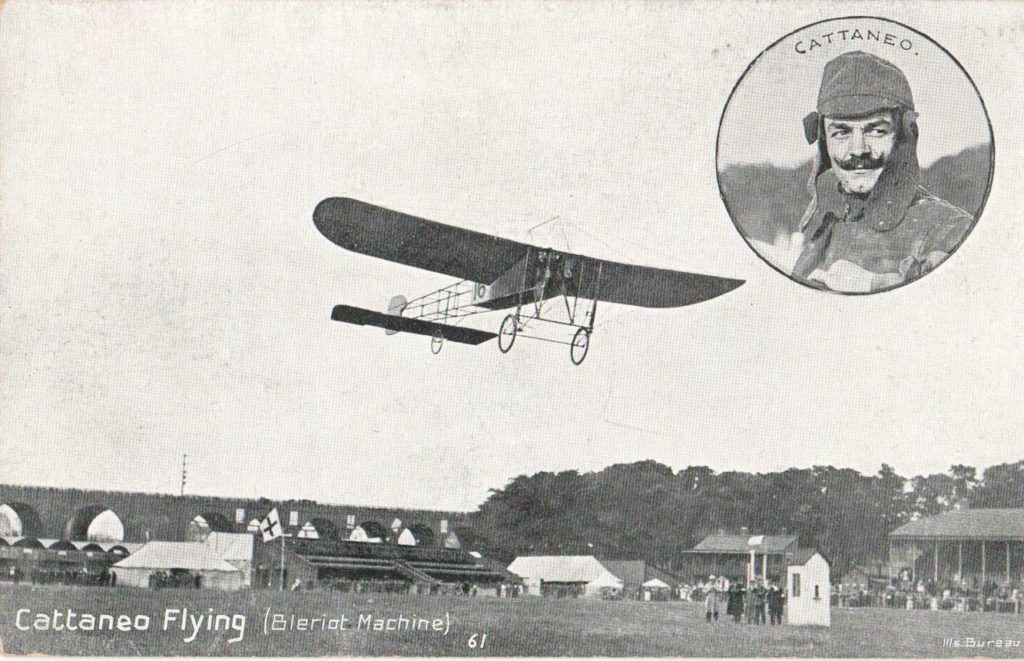 The Lanark Airshow was the first airshow in Scotland and it was particularly special in that it was also the second British International Airshow. It attracted competitors from all over the world–America, Peru, France, Holland, Italy, Switzerland, and of course Britain. There were twenty-two competitors for the show but in the event only seventeen turned up, however these brave men provided a great show for the spectators.

Over 250,000 people came to Lanark between August 6th and August 13th 1910. To accommodate these crowds, a station was constructed at Lanark race course and a special time table was organised with preference given to trains exclusively for 1st class passengers. Altogether 14 special trains a day were organized for each day of the airshow.

It is reckoned that 25,000 half pence stamps were sold at the racecourse but it is not known how many were franked with the grandstand postmark. Fairly early on, it was due to pressure on post office employees to handle all the outgoing mail in Lanark.

Also, there has been plenty of speculation as to whether mail was carried in Lanark. Certainly there was a competition that involved dropping despatches from the planes. This could have involved mail. The dropping of dispatches interested the military in that instead of dispatches, one could go for precision bombing!

McCardle landed in a field near Corstophine on August 8th 1910. Fortunately his plane was not damaged. It merely ran out of fuel. It was brought back to Lanark by lorry.

Lanark was the only airshow in 1910 where there were no fatalities, despite the fact that five beds had been reserved in St Mary’s hospital.

Military interest in aircraft was strong, and it is interesting to note that two of the competitors Samuel Cody and Captain Dickson had strong links with the military. Samuel Cody had been involved since 1908 with experimental work at Farnborough. Captain Dickson was a serving officer and the first military officer to fly in Scotland. He also took up the first passenger for a flight. It was after the Lanark event that the military put in an order for sixty planes; these were to form the core of the Royal Flying Corps which in 1918 became the RAF.

Many of the cards used at Lanark were not actually of Lanark. One card was actually signed by an Italian aviator called Cattaneo. Cattaneo was a great heart throb with the local women in Lanark. This signed card is one of a small collection of signed cards that belongs to Royal Burgh of Lanark Museum Trust.

In 2010, to commemorate the centenary of the Air Show, a memorial statue was erected on the railway embankment at Lanark Loch. This statue, “The Spirit of Flight”, was constructed by P. Johnston and company of Ratho Byres Forge and shows replicas of three of the aircraft that actually flew at Lanark one hundred years earlier: a Bristol Box Kite, a Bleriot and an Antoinette.