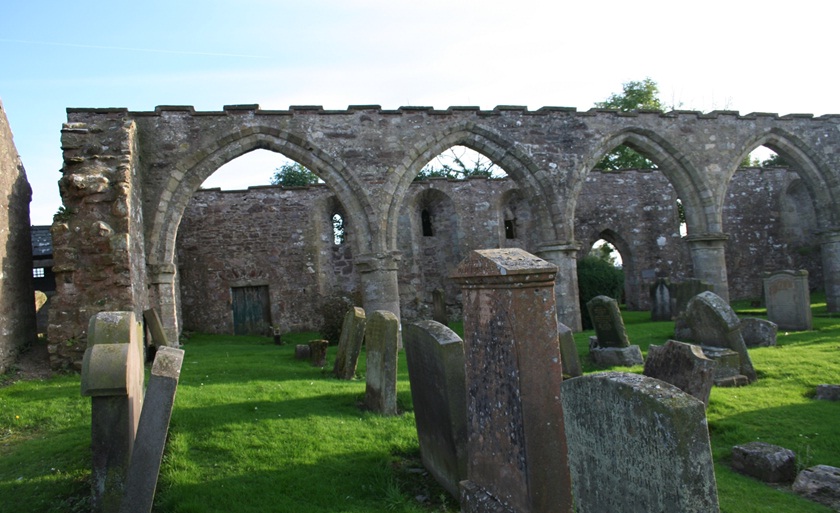 It is remarkable that in Scotland there is only one medieval church dedicated to St Kentigern under his own proper name. There are many others dedicated to him under the name of St Mungo. The church of St Kentigern lies immediately to the south-east of Lanark. Tradition tells that it was founded by the Saint himself, shortly before he died in 603AD at Hoddam, Dumfriesshire.

King David I  granted between the years 1150 and 1153 to the Monastery of Dryburgh, the church of St Kentigern’s, with all the lands belonging to it. The grant was confirmed by Bishop Herbert of Glasgow, by Malcolm IV and William the Lion. The rights of the Monastery of Dryburgh to the church were confirmed by various bishops, popes, and kings from 1174 to 1258.  In May 1228, Pope Gregory VIII took the parish church of St Kentigern’s and the other possessions of the Abbey of Dryburgh under his special protection, “lest they should be disturbed by the injuries of wicked men”.

During the early middle ages, various donations were made by local proprietors to increase the revenues of the parish church, including several tenements. In the reign of William the Lion, Jordanus de Brac granted to the church of St Mary of Dryburgh and St Kentigern of Lanark, certain lands in the parish as a charitable gift for the soul of King William and others—a gift confirmed by John Brac, his son. These lands have from time immemorial been known under the name of Braxfield, a name which, during the latter half of the eighteenth century, gave a title to the celebrated Lord Justice Clerk Macqueen, who became known as Lord Braxfield (the hanging judge).

There were various chantries (chapels) within the parish church of St Kentigern.  Feu-duties were set aside by pious parishioners in order to supply lights. In the year 1500, King James IV granted to William Clarkson, chaplain at the altar of the Blessed Virgin within the parish church of Lanark, a tenement in the burgh, which had reverted to the King by reason of the bastardy of the last owner. The Canons of Dryburgh appropriated the tithes continuously from the time of the royal grant until the Reformation. Three priests served at the altars at St Kentigern’s during that period.

The ruins of the St Kentigern’s are interesting. The style of architecture of this late 12th century. The church is a fine example of transitional architecture,  from Norman to early Gothic. The Norman style features are the insides of the windows. The outer parts of the windows are Gothic in style, as is the South doorway. This doorway is regarded as one of the finest examples of late 12th Century doorways in the whole of the UK.

The original church was box shaped, however in the 13th century a chancel was added. The only surviving part of this addition is the chancel arch itself. About 1400 an aisle was added on the north side of the original church, the arches of these still survive. These had to be rebuilt after a bad storm in the early 1950s which caused the original arches to collapse.

The doorway at the west end of the church is late 19th century and was inserted to give strength to the ruins and to protect them. Above this doorway are several 13th century tombstones which have been inserted and as such are some of the oldest tombstones associated with the church.

In the post-reformation period two aisles were added to St Kentigern’s. The one to the north by the ruins of the chancel is the Lockhart aisle, where some of the Lockharts of the Lee are buried. The smaller one to the south is the Cleghorn aisle. Both date to the late 16th/early 17th century. No further additions were made to the church before it was abandoned in favour of the current parish church of St Nicholas in the late 18th century.

The belfry stood outside the west wall. It has completely disappeared, but its site is still definable. The bell which formerly hung in the belfry still exists. It was removed to the town steeple in St Nicholas church when St Kentigern’s Church was disused for public worship. It is still rung several times each day. The traditional date of the bell is 1110, but in reality local antiquarians mistook the gothic 1510 for 1110. The reason is that the Gothic script is difficult to read, and in the year 1110 no bells had a date on them. The myth of the bell belonging to 1110 starts in 1740 when it was being recast for the third time by Ormiston and Cunningham.  Little remains of the original bell beyond the metal, as it has frequently been recast up until recent times.