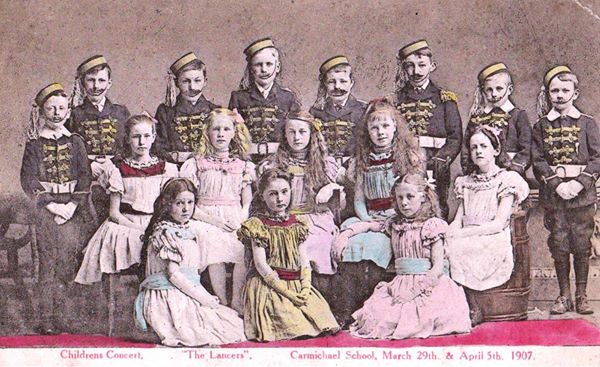 An unusual commemorative card of a Primary School play by the children of Carmichael Primary in 1907. Such a performance reflects the Nationalism prevalent in Britain at the time. By 1907, Britain had finally won the 2nd Boer War. Jingoism about the Boer War was replaced by a desire to put Germany in her place. In 1907, a major programme was initiated to build Dreadnought battleships. This was part of British policy to ensure that the British Navy was twice as powerful as any other.

The subject of the Lancers is interesting. The Lancers took part in a heroic charge at the battle of Omdurman in the Sudan against the forces of the Madhi in 1898. Young Winston Churchill took part in this. It was a pretty foolhardy thing to do, but it stirred people’s hearts and patriotic feelings.