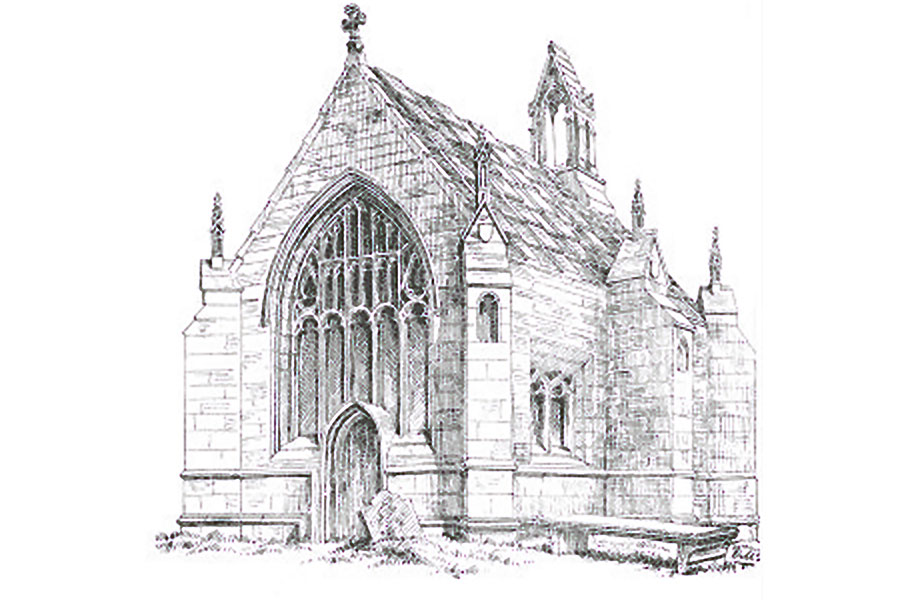 The closure of Carnwath Church has prompted me to write a brief history of the Church. The church was built by the architect David Bryce in 1864-7.  It was designed to seat over 1,000 people;  the roof was modelled on that of the old Scottish Parliament.  It is this roof which is giving cause for concern and it is the restoration cost that probably prompted closure.

The history of the church of St Mary’s Carnwath goes back to the late twelfth century with the arrival of the Sommerville family in the parish.  The motte on the golf course was constructed by them at this time.  It has been suggested that the church was constructed around a stone tower;  there are precedents for this but this has still to be proved by archaeological investigation.

The church of St Mary’s originally belonged to the Bishop of Glasgow according to a charter issued by the papacy in 1165 confirming the ownership on Bishop Ingram.   However the builder was the second William de Sommerville before 1165.   Apparently Carnwath at this stage was in the parish of Libberton, but by 1186 Carnwath becomes a separate parish in its own right.  Field walking discoveries in the glebe field show that there were inhabitants at this time in Carnwath.  The evidence is some plain white gritty early Medieval pottery.

Although the church was originally granted to the Bishopric of Glasgow there was some dispute about this.   However, a decision confirming the ownership to Glasgow was confirmed.

There is some information about the clergy prior to the erection of St Mary’s Aisle.  St Mary’s Aisle is incidentally the only surviving part of the Medieval Church.

The earliest recorded clergyman was lord Robert Tindal about 1225.   He was connected with Glasgow Cathedral and probably an absentee landlord.

In 1319 we hear of Edward II granting the prebend of Carnwath to William of Herlaston.   Apparently pennies of this period were discovered by detectorists in the glebe field.   Unfortunately, the location of them is unknown.

As the Scots reasserted themselves, Robert Cambrun, treasurer of Glasgow Cathedral was given the Prebend of Carnwath in 1325.   A prebend was an absentee cleric to collect money from the church lands forming the prebendary.    A prebendary was a collection of parishes and the prebend was given a house near the cathedral and had a special seat in the Cathedral.    The only prebend’s house to survive is Provand’s Lordship in Glasgow.

The prebend would appoint a local cleric on a small sum of money to run the parish church.  We do not have the names of these clergymen.

Robert Cambrun was succeeded by Robert of Strathern by 1330.  In 1349 John of Caithness held the prebendary.   This was a significant year and one wonders whether John of Caithness succumbed to the Black Death.

By 1362 John de Peebles was in charge and he had control over the church for a short while to the time of Henry of Mangavilla who died in 1371. He was succeed by Wiliam Etale who in turn was followed by Walter Trail who was appointed by the Pope to be treasurer of Glasgow Cathedral.

After the time of David Falconer, St Mary’s became a collegiate church in 1424. Thomas de Somerville set up the foundation which may have been done in the time of Thomas Trail, a relative of Walter Trail.

From 1424 the Somervilles played more part in the management of St Mary’s Carnwath. It is at this stage more is heard of Carnwath. Hugh Kennedy who was a relative of James I of Scotland, was recorded as holding the Prebendery of Carnwath.

The history of St Mary’s becomes much more interesting during the time of vicar William Wishart who had to be removed for two reasons–failure to supply the Eucharist to the parishioners and allowing the suicide victim William Adam to be buried in the church. A new vicar Richard Brown replaced him.

In 1462 reference is made to a chaplain at Couthally Castle who was probably the vicar as well. His name was Thomas Telfer. Meanwhile, the post of Prebend went to a local man George Carmichael in 1474; he accompanied a diplomatic mission to establish good relations between England and Scotland in 1484.

In 1496 Sir Thomas Bartilmew became the vicar though he did not stay very long in Carnwath before obtaining a preferment to Linlithgow.

By the turn of the sixteenth century, Sir William Wilkinson, vicar of Carnwath was bound over to keep the peacealong with several other clergymen as a result of a dispute with George Hay and Sir Alexander Romanos.

For the first time in 1516, the prebendary Andrew Sibbald of Carnwath has an M.A . Was this an M.A from the University of Glasgow?

In 1554 Sir John Cunningham, vicar of Carnwath was referred to as witnessing a charter to the Abbey of Paisley. He was probably the vicar pensioner at the Reformation who reported that his benefice was worth £16. Half of this came from the prebendary and half from the glebe lands that were rented out to the Sommervilles.

At the Reformation Sir Duncan Aitken reported that the stipend for the aisle of St Mary’s was twenty four merks.

The last prebendary Thomas Livingston, rector of Carnwath, states that the parsonage and vicarage revenues were £200 Scots.