A brief history of Carluke 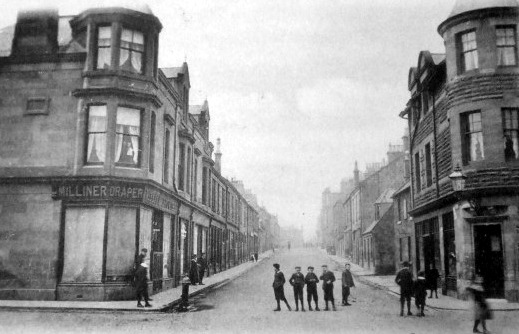 Although Carluke is a parish with seemingly ordinary buildings and inhabitants, the stories behind the buildings and the people make the town and parish unique.

The origins of Carluke’s name remain a mystery.  However, it is likely that it is derived from Eglis Malouc–the church of St Malouc. This Celtic saint is connected with Lesmahagow and St Malo in France. This saint was held in special affection by the Culdee monks. They were at Lesmahagow before the Tironensians.

The earliest documented evidence about Carluke relates to the church.  The Tironesian monks from Kelso Abbey had a church in the forest of  Mauldslie in the 12th century.  This was called ‘Eglismalesock’.  The monks however moved the church to a healthier place perhaps as early as the 14th century.   The place chosen was at the centre of the present old churchyard in the town of Carluke.

No trace remains of this ancient church, but the bell tower built in 1714 can still be seen.   The local name for the church was Forest Kirk, and the visitor to the churchyard will see that ‘Forest’ was once a very common surname in Carluke parish.  On the tower itself is a plaque of especial interest to Canadians.  It commemorates a gift to the town made by James Ross and his uncles.   Thomas and James Gibb, all from Quebec.  James Ross left the town as a penniless teenager but became one of Canada’s richest men and died a multi-millionaire.

St Andrew’s Church replaced the ruinous ‘Forest Kirk’ in 1799.  It was built to a design of Henry Bell, who built the famous steamship ‘Comet’.  This church stands at the top of Mount Stuart Street and because it could be seen from all approaches to the town, some say even as far away as Glasgow Green, it had the nickname of the ‘Visible Kirk’.

Carluke took a long time to expand.  By the end of the 18th Century, there was a population of around 380.  The main occupation at that time was weaving but this declined after a few decades to be replaced by various mining activities.  Industrialisation brought iron-making to the parish at Castlehill and, with the development of the blast furnace came coal, ironstone, limestone, and freestone mining, the latter brought about by the demand for housing from the influx of workers to the town and parish.  Iron making lasted only forty years but coal mining remained an important industry until the last pit closed in the 1950s.

It was during the 1840s–a period of sudden growth–that the market cross appears to have been moved from the foot of the town’s High Street to the top, near the present gardens.  The Market was, until the formal gardens were laid out in the l930s, the site of the town’s cattle fairs held four times a year.  Today, although it is a popular place in the summer months, it draws its biggest crowds on Christmas Eve when Santa Claus makes his annual visit.

Here in 1915 possibly the largest crowd ever gathered to welcome home Corporal William Angus who had been awarded the Victoria Cross for rescuing a wounded soldier from ‘No Man’s Land’.   What made it all the more special to the town was the man he saved, Lieutenant James Martin, also came from Carluke.  During his daring rescue, Angus was wounded forty time.   The Victoria Cross was also won by Sergeant Thomas Caldwell in 1918 for single-handedly destroying a machine-gun nest and taking eighteen prisoners.

During the Second World War the medal was won by Lieutenant Donald Cameron while in command of one of the midget submarine sent to destroy the battleship ‘Tripitz’.   For a town as small as Carluke to have three of its inhabitants winners of Victoria Crosses must surely be unique.

Carluke has another soldier who enterprise has put her quite literally on the map.  He is Major General William Roy, the man credited with the founding of the Ordnance Survey mapping system. Roy was born near Miltonhead in 1726.  The site is marked by a trigonometrical point erected in the 1950s by the Ordnance Survey as a tribute to their founder.

A list of eminent ‘Carlukeans’ must include the names of Rankin, Forrest, and Greenshields.  Dr Daniel Rankin never left the town but his work as a doctor of medicine, a disseminator of knowledge to this fellow townspeople, a paleontologist and as a local historian has ensured that his name will not be forgotten.    After his death, the townspeople erected the Rankin Memorial Hall and Library.  When the building had to be demolished in 1979 as part of a road improvement scheme, a clock in his memory was erected in the High Street.

Robert Forrest and John Greenshields were both sculptors who lived in the 19th century.  They were mainly self-taught but both men gained fame for their work and both have statues in towns around Scotland.  Examples include John Knox in the Glasgow Necropolis by Forrest and Sir Walter Scott in the Parliament Hall in Edinburgh by Greenshields.

Fruit growing has always been an important industry in Carluke.  The monks from Kelso grew many varieties of apple and pear.  By the late 19th century, strawberries were the main crop.  From the 1920s however, tomatoes became increasingly popular.  The combination of colourful plants and home baking bring thousands of visitors each weekend into the parish especially around the village of Braidwood.

The town also hopes to have another major tourist attraction in its High Mill which stands at the top of Chapel Street.  This mill was built by the Dick family around 1797.  It was originally a windmill but was converted to steam power in the 1830s.  Later it was powered by a suction gas engine until it closed down in the 1930s.   Fortunately, much of the original machinery was left in situ.  There was a plan to restore it but this fell through and the mill is in a very ruinous state.