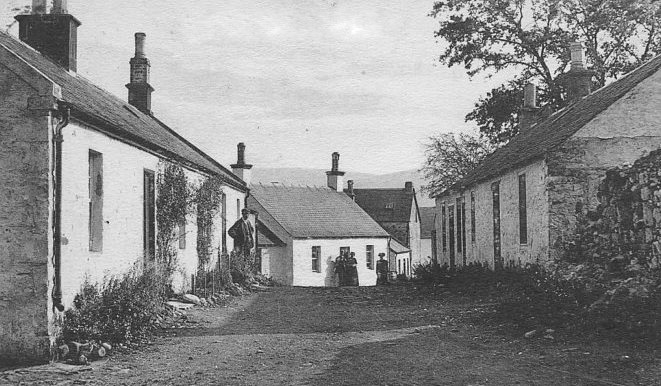 There is a well known saying ‘Out of the World and into Crawfordjohn’ and so came John, stepson of Baldwin, a Flemish lord from Biggar to build his castle, his church, and his mill on the banks of the Duneaton River and establish, in the mid-12th century, the village of Crawfordjohn.

A charter granted by Wice, the Norman lord of the manor of Wiston, is recorded in the Chartulary of the Abbey of Kelso and so just prior to 1179 a parish became established and the then so-called ‘Chapel of John’ became the Parish church.  The name ‘Crawfordjohn’–the only known village or town in Scotland where a surname precedes the Christian name–was first recorded in 1300.

There are no known records of the Celts living in this district.  However, there are plenty of hill forts which were built by them.  There is also evidence of the Roman’s presence from their roads and forts.  In 1990, during the re-routing of the A74 highway, a circle of 23 stones belonging to the late Neolithic / early Bronze Age was discovered on the moors at Wildshaw. So it is certainly true that life existed in the parish long before the advent of Baldwin.

Knowhead Castle and the Manor House or Boghouse no longer exist although some ruins of the former did so until the 1950s when the District Council created a play area.  Records remain of visits paid to Boghouse by James V and his Consort, Marie de Lorraine.  As well as hunting and entertaining, they showed a keen interest in the gold mines located on the Crawford moors.  It is recorded that on one such occasion James had his guests served as a sweet, at the end of the banquet, freshly minted coins of locally mined gold served in dishes of the same material.

In 1503 James Hamilton, Earl of Arran was overlord of part of the parish and the connection with the Hamilton family was to last for some considerable time.  In 1688 Charles II awarded a Charter to the Duchess of Hamilton making the village a burgh with the privilege of holding a weekly market and annual fair.  Later the Duchess gave these titles to her son, the Early of Selkirk, who also showed interest in the gold and silver mines.

In the area there are ruins of fortified farms or bastle houses at Snar and Glendorch.   These date to the late 16th century, a period of political and domestic upheaval in southern Scotland. Snar has an interesting history relating to the story of Jock of Snar. Jock went away to market one day and whilst he was away, his wife was entertaining the local priest. Jock came back a bit earlier than expected and found the priest making love to his wife. Enraged Jock tossed the unfortunate priest into a nearby pool to cool his ardour. The pool was renamed from that day on the priest’s pool in commemoration of that event.

Crawfordjohn, during the Covenanting times, was not actually involved in fighting as such, but apparently many policy decisions were made there.  The Covenant was restated and signed again at a Conventicle on the Brown Hill between Douglas and the village.

The drove road between Stirling and the south passes through the village and was evidently used by the Jacobites in 1746 on their return from England.  Years later the English poet Wordsworth and his sister Dorothy spent some time in the village.

The village has very few celebrities.   Lord Colebrooke, who in the nineteenth century succeeded the Earls of Selkirk as landlord, lived at Glengonnar in the beautiful village of Abington and was later aide-de-camp to King Edward VII; less well known in Major Stephen Mitchell who lived at Gilkerscleugh and was at one time MP for the area.   (He was a descendant of Stephen Mitchell who founded the famous Mitchell Library in Glasgow, now one of the largest reference libraries in Europe).

Crawfordjohn Church has had a relatively stormy existence passing from Roman Catholicism to Presbyterianism, then to Episcopalianism and back to the Presbyterian faith.  Now no longer used as a church, it has a new life as a heritage centre.  Even so, inter-denominational services are held there and there is a proviso that past residents of the village may be buried in the church grounds.  During the summer months from May until September, visitors can trace the history of the village, its life and some of the past characters, and also view some of the artefacts and relics of life in this mainly farming community.  One such craft will never be forgotten–the manufacture of curling stones from Craighead stone.  It is also hoped to provide a means of tracing the roots of those interred in the cemetery.  Unfortunately, except for the church, there are few historic sites in Crawfordjohn.   However, there is still much of interest in the parish with plenty of easy walks around the village, including a picnic area down by the river.  To find the village northbound leave the M74 just north of Abington and take the A74 to junction B740.  To find it southbound, leave the M74 at Poneil Exit then follow the A74 to Millbank crossing under the M74 and rejoining the A74 at Junction with the B740.

The heritage centre is open from late May until September every Saturday and Sunday from 2 p.m. until 5 p.m.  To view at other times, contact the Colebrooke Arms Hotel in the village.